Assassin's Screed: Look out, the next spam email details your assassination

You may think you've heard it all with spam mail; from far off princes promising you thousands to sextortion emails threatening you with exposure if you don't fork over your earnings.  However, we're sure that the latest spam email hitting our inboxes will become a classic. It's from an assassin, and they're after, 'your severed hands'. 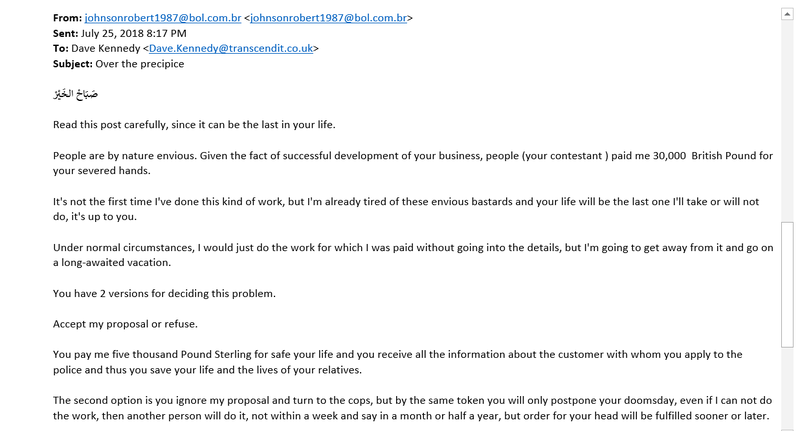 The image reads as follows:

Read this post carefully, since it can be the last in your life.

People are by nature envious. Given the fact of successful development of your business, people (your contestant) paid me 30,000 British Pound for your severed hands.

It's not the first time I've done this kind of work, but I'm already tired of these envious bastards and your life will be the last one I'll take or will not do, it's up to you.

Under normal circumstances, I would just do the work for which I was paid without going into the details, but I'm going to get away from it and go on a long-awaited vacation.

You have 2 versions for deciding this problem.

Accept my proposal or refuse.

You pay me five thousand Pound Sterling for safe your life and you receive all the information about the customer with whom you apply to the police and thus you save your life and the lives of your relatives.

The second option is you ignore my proposal and turn to the cops, but by the same token you will only postpone your doomsday, even if I can not do the work, then another person will do it, not within a week and say in a month or half a year, but order for your head will be fulfilled sooner or later.

Thus, you will be afraid of every rustle, walk around looking and thinking that you are being persecuted.

If you want such a life, your choice, but if I were you, I would think very well.

Tickets to England have been taken for July 28, and you have exactly 3 days to transfer money to an anonymous account bitcoin 1GwGWQys2rSr8CMpnztkdd7E7YyyVHs8P4.

The last time I can check it 28th before flying to you.

In the event of receiving a reward, I will not come to take your life, but will also pass all the information about your customer (Let the bastards get what they deserve) and you can protect yourself, otherwise you know the consequences.

The well-being of the future life depends on your choice.

Think about your life, you family.

على كل مشيئة الله (On all the will of God)

This may seem both ridiculous and hilarious, but to less tech savvy recipients this could be a scary message to receive. Fortunately, there's a few indicators that this assassin might not be as threatening as they appear.

Some of the sentences sound really odd

We're not saying that every assassin needs an English degree, but when the grammar in an email is poor it might mean you're reading some junk mail. The majority of these kinds of emails come from people who don't speak English as their first language, and luckily for us, that means its easy to tell if you're speaking to a fake assassin.

'By the same token you will only postpone your doomsday'

'The well-being of the future life depends on your choice.'

'Think about your life, you family'

No matter how you read those sentences, they sound weird. Even giving this assassin the benefit of the doubt, phrases like, 'Thus, you will be afraid of every rustle, walk around looking and thinking that you are being persecuted,' have nothing to do with the offer the assassin is putting on the table, and are clearly there just to freak us out. If an email you've received sounds this weird, take it with a pinch of salt.

The premise is really, really strange

Everybody and their mum has now received the Armenian prince email, whereby a rich gent has millions of pounds to give you if just send him your bank details. As such, con artists are now having to come up with more inventive ways of swindling you out of your cash, and like this email, the storyline is often really weird.

Lets deconstruct this for a second. So we've got an assassin who has been hired by your 'contestant' for your severed hands. But a life of crime has apparently taken its toll on this assassin who just wants to get away from it all, and go on holiday. For the low price of £5,000, they'll simply turn down the £30,000 from your competitor and head to Magaluf for the season.

As with most spam mail, if you slow down and read it properly the holes will start to show. Resist the urge to react quickly to meet the arbitrary deadline, and get a second opinion if you're at all convinced.

There's way too much information

This assassin has spent the entire email (nearly 400 words) preserving their anonymity, and building a sense of mystery and danger. You should be afraid of every rustle, this assassin could be round the very next corner.

However, if you check out the sender, it's johnsonrobert1987@bol.com.br. If we were taking this email at all seriously, from this we could deduce that this assassin's name is Robert Johnson, and he's 31 years old. We don't regularly correspond with high profile assassins, but this seems like a lot of personal information to provide your target with.

The end of the email address '@bol.com.br' gives us a fair bit of information too - through a quick search we found that it's an email provider in Brazil. They've also given you the exact date of their flight, which is at best unnecessary and at worst a key piece of identifying information that could track down this individual.

If it seems like there's too much information in a spam email you've received, it's not a threat, it's a sales pitch. The writer is attempting to persuade you of their own legitimacy, which they'd only ever do if they were illegitimate. Don't stress out, send it to junk.

Still think this could be legit?

Take a screenshot, and send it to your friendly IT support team. We're happy to check it out for you. You can also screenshot these emails and send them to the police.

At time of writing, the BitCoin address in question had received no funds.

We appreciate it when you take the time to give us feedback. A system called CustomerSure records our client's responses, so you can trust that our reviews are from real people.
Find out what they're saying here.
Excellent - problem resolved quickly and efficiently. Barbara Sadler, Samuel Phillips