If you were a teenager in the 80's or 90's, you’re probably familiar with chain letters - something that arrived through your door, or when technology improved, arrived in your inbox. There might have been a tale from someone who needed your (financial) help, a threat of a ghost attack if you didn’t comply, or a promise that you would meet ‘the one’ if you followed the instructions. Regardless of what the story was, the intent was the same - you, the recipient, had to make 5, 10, 50 copies of this, and send them on.

Physical chain letters that needed to be photocopied and then posted out seem to be a thing of the past - even emailed chain letters seem to have fallen out of fashion. However, chain letters have found a new home in social media. These days, Facebook seems to be the top peddler of chain letters - only instead of revealing the name of your crush, the messages are promising you privacy.

Below are a couple of modern day chain letters that have been doing the rounds on Facebook. As you can see, both are of a similar vein, ‘Post this, and Facebook won’t be able to use/access your [Photos/Information/Face]’. 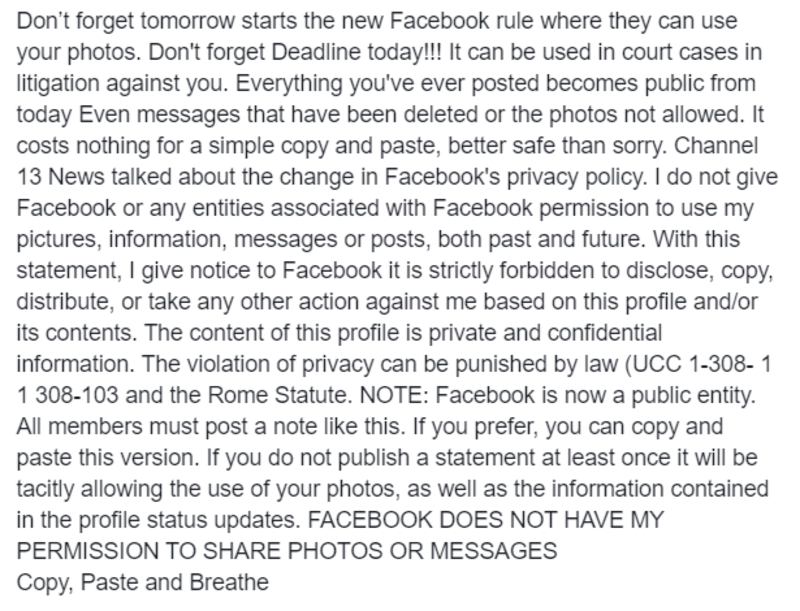 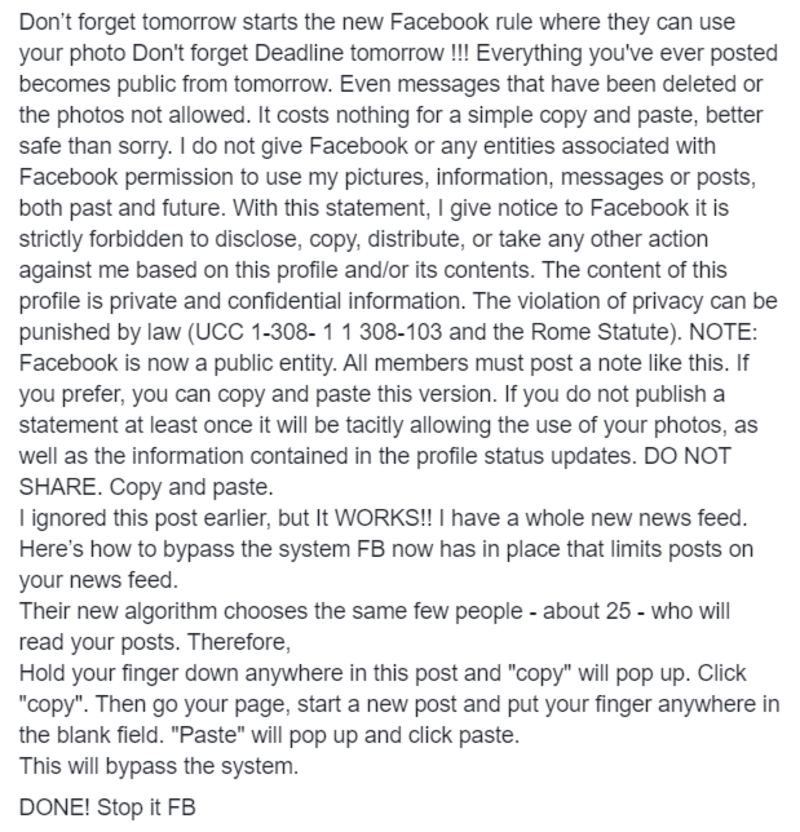 What makes these chain letters?

There are a couple of features of these posts that bear the hallmarks of the long lost chain letter; it pushes you to repost, and there’s a penalty for not reposting. There’s a sense of sincerity about it, in that it refers to trusted sources, (Channel 13 News). Both use fairly official sounding language, ‘The violation of privacy can be punished by law’. This language is designed to give weight to what is, without it, a fairly weak premise.

There’s also an element of fear, as if the post is designed to make you panic, copy and paste before you’ve got your brain in gear, ‘Everything you’ve ever posted becomes public from today Even [sic] messages that have been deleted or the photos not allowed’. Facebook accessing our deleted messages is certainly enough to send people into a panic. ‘It can be used in court cases or litigation against you’ is pretty scary too.

‘It costs nothing for a simple copy and paste, better safe than sorry,’ really cuts to the heart of these chain posts. Because of the ease at which these can be shared, it seems pretty harmless to repost it - if indeed, there’s the possibility of your photos and messages remaining private! Unfortunately, that’s not the case.

How are we supposed to know they aren’t genuine?

Just like our phishing emails, there’s a few different ways to tell whether you’re looking at a genuine post or a chain post. The fastest way to figure out whether a post is genuine or not is to give it a quick google before reposting it yourself. We put, ‘I do not give Facebook permission’ into Google, and a bunch of articles appeared from reputable sources confirming that it was a hoax - there’s even one from our favourite truth seekers, snopes.

There’s even a trope from phishing emails in these posts - the deadline. A deadline in this context is designed to encourage you to act quickly without thinking - because as soon as you start thinking, or reading carefully, you’re less likely to repost this content. Just like with phishing emails, the trick is to slow down, take your time and do your own research before posting.

There’s another huge indicator of a social media chain letter - ‘DO NOT SHARE. Copy and paste.’ This is important because of the way that sharing works on Facebook. When you share a post, you effectively post a link to the original post - along with all the likes, reactions and comments. Obviously for chain posts this is a bad idea, because if you share a post there’s probably going to be half a million people commenting underneath with some variation of ‘this isn’t true’. By asking people to copy and paste, the peddlers of these chain post get their nonfactual messages out there without thousands of people debunking it.

There’s been a lot going on with Facebook in the news, particularly surrounding privacy. It can be scary to think that all of your information isn’t adequately protected by Facebook. If you’re still worried about privacy and the things you upload to Facebook, Snopes goes into great detail about the action you can take as a Facebook user. We wish it was a simple as reposting this status - but it isn’t going to protect your privacy.

We appreciate it when you take the time to give us feedback. A system called CustomerSure records our client's responses, so you can trust that our reviews are from real people.
Find out what they're saying here.
The help and support we receive from Transcendit is outstanding Wyre Council