Fact or fiction? How to tell whether what you’re sharing is true

If you have an account on Facebook, Instagram or Twitter, it’s pretty likely that you’ve shared something with your friends or followers. Whether it’s news stories, videos or photos; we’re sharing material all the time. Unfortunately, the things we’re sharing might not always be true. Thanks to social media, anyone can now create an image with some text - and it can be all over the internet a few thousand times over before you’ve even said ‘fact check’.

As these mixed media images are some of the most frequently shared, we thought we’d take a look at a popular one and see if we can figure out whether it’s fact or fiction; giving you the tools to be a social media sleuth in the process.

But why bother creating fake content? There’s no smoke without fire, right? Well, in truth, the currency of the internet is traffic. The more clicks and shares an image gets, the more traffic the creator is receiving. This could just be a way of promoting a user, a user’s certain viewpoint or agenda, or the clicks could translate into cash - if a link or click in the image sends you straight to the owner’s of their websites.

How do we know if it’s fact or fiction?

Just like with phishing emails, there are a few telltale signs of a fake with these kinds of images on social media. We’re taking a look at an iteration that has come up time and again in different guises; the sex trafficking text. 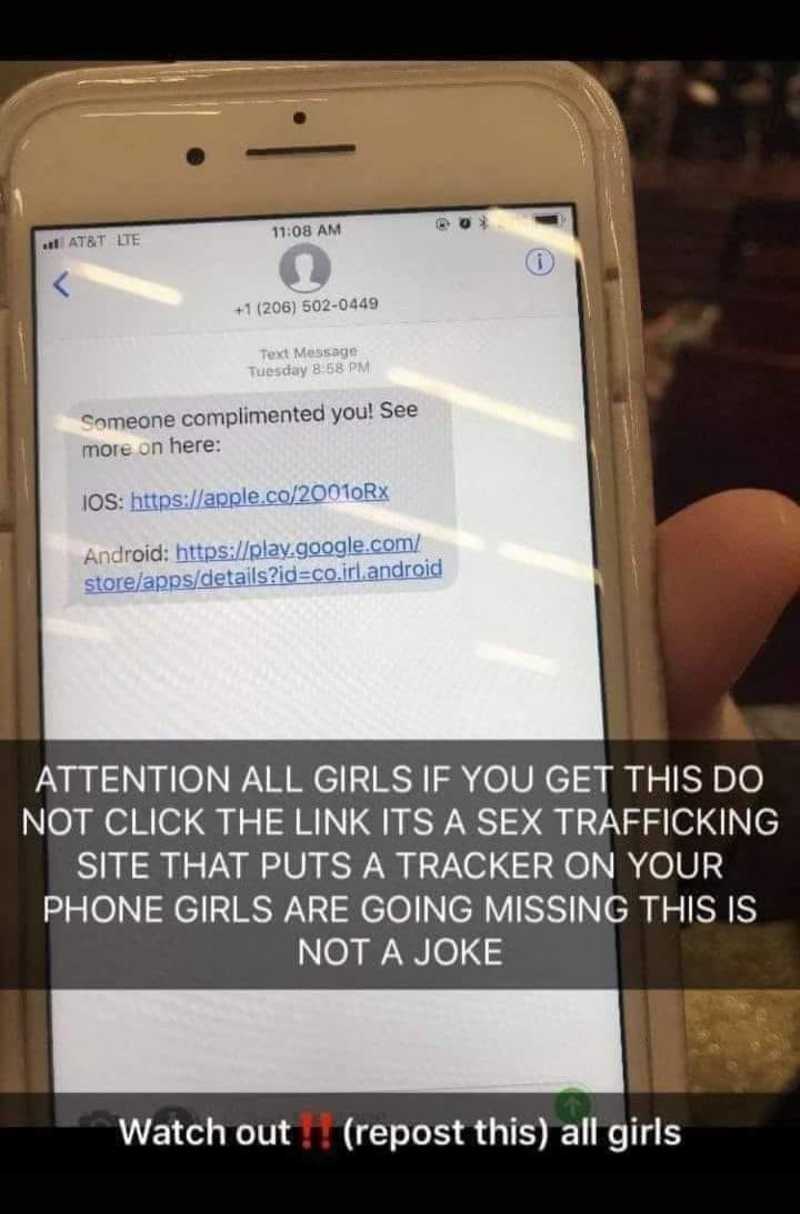 This is a popular image, which has done the rounds on Facebook for a really long time (at least as early as 2018, which makes it ancient in social media terms). The premise is that ‘someone’ has received the following text, ‘Someone complimented you! See more on here: IOS [link] Android [link]’

The overlay for the image reads, ‘ATTENTION ALL GIRLS IF YOU GET THIS DO NOT CLICK THE LINK ITS A SEX TRAFFICKING SITE THAT PUTS A TRACKER ON YOUR PHONE GIRLS ARE GOING MISSING THIS IS NOT A JOKE’ followed by ‘Watch out!! (repost this) all girls.’

So, the biggest indication that this might not be legitimate is that there are zero links in this post. Nothing to back up the claim that ‘girls are going missing’ - not from a trustworthy news source or the police. If such an app was linked to sex trafficking, then you’d think it would have captured the attention of national news.

The second indication is the highly emotive language. Just like phishing emails, these images are designed to raise an emotional response; and fear and panic work wonders in getting people to click. The idea that you could click a link and download a tracker to your device is scary - add that to the capitalisation and the lack of punctuation help to get people to panic, and share without thinking too much about the content.

The absolute easiest way to check whether something you’re sharing is fact, or fiction, is to search a phrase from the image online. From the results, choose a well known website that you trust; snopes.com and fullfact.org are trustworthy fact checking bodies that often run articles on the images that are frequently shared on Facebook.

We did just that, and found this supposed sex trafficking text, as well as a snopes article debunking it here: https://www.snopes.com/fact-check/irl-texts-trafficking/

If in doubt, check it out

We’re not suggesting that you start clicking links that you receive in unsolicited text messages; a good rule of thumb is that a weirdly vague text that didn’t come from someone in your contacts is a text that’s should go straight to Junk.

However, the material we share on social media can do a different kind of damage. It’s very easy to get caught up in the emotive nature of these posts; but sharing misinformation can lead to mass panic and hysteria - not just online, but offline too.

An online search can clear up a lot of these conspiracies before they gain traction on Facebook and Twitter. If you have doubts about an image online, give it a quick Google before you share.

The whole of our team adhere to the same values, beliefs and policies - the principles that were written when Transcendit first formed in 2000. Whether you come to us for a refurbished computer, cloud services or recovery backup you can be confident that you'll always receive the same excellent service.

We appreciate it when you take the time to give us feedback. A system called CustomerSure records our client's responses, so you can trust that our reviews are from real people.
Find out what they're saying here.
Another rescue from the fantastic team at Transcendit! Thanks David W! Results Communications Ltd