What do kids learn at Code Club? We found out

'Computers aren't clever like you', says Peter Johnson, IT teacher and Code Club leader. 'To get them to work, you have to tell them exactly what you want them to do'.

Transcendit Director Tom Tinsley and I are sitting in a classroom at Gosforth Junior High Academy with a group of children, who are at their first Code Club session. They're getting ready to try out Python, a programming language, and Explorer Hat, a dinky bit of kit which should allow them to show off their code skills.

The goal is to write some code which makes a wheel spin, and then make something using the art materials to attach to it. Peter tells everyone it must be 'awesomely cool'.

As the kids start typing furiously, Peter tells us how IT lessons have changed since he started teaching. 'I used to have to teach Powerpoint and Excel. I was always trying to sneak in stuff to make it more fun - like lego, robotics and low-level programming.'

'Now programming and coding is on the curriculum, I don't need to sneak it into lessons anymore. Code Club takes it further still, pushing the kids to do things that they couldn't do in class. Stuff that's a little more difficult.'

To a coding novice, this script looks incredibly confusing - yet all the kids bash it out and have the wheel spinning before I have the chance to ask how they're getting on. At this point I'd be racing to the art materials, but most of the kids are more interested in adding further lines to their code.

One group of girls have already run the code which spins the wheel forwards, and decide they'd like the wheel to change direction. In a few clicks they've managed it. They just copied and pasted the original code and edited it, because, 'typing it up took too long'. A future developer if ever I saw one. 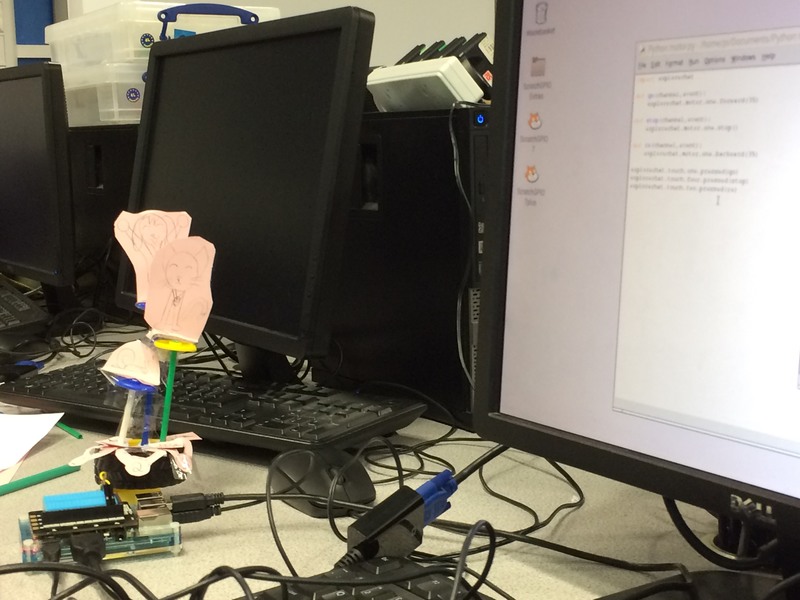 It's a clever way to teach the lesson, having a physical bit of kit which runs the code rather than everything being on the computer. It's very satisfying when this string of seemingly meaningless words and brackets on a screen spins a real wheel on a desk, particularly when the kids attach their drawings and cardboard structures.

One group's 'super car' flies across the room. After retrieving it, the group resolve to edit the code in order to slow the wheel down - a task that would have me reaching for the instructions, but which they manage in seconds. 'We accidentally closed the program while it was still running, and it went haywire,' says one boy. 'It wasn't our code though - the wiring was wrong.' 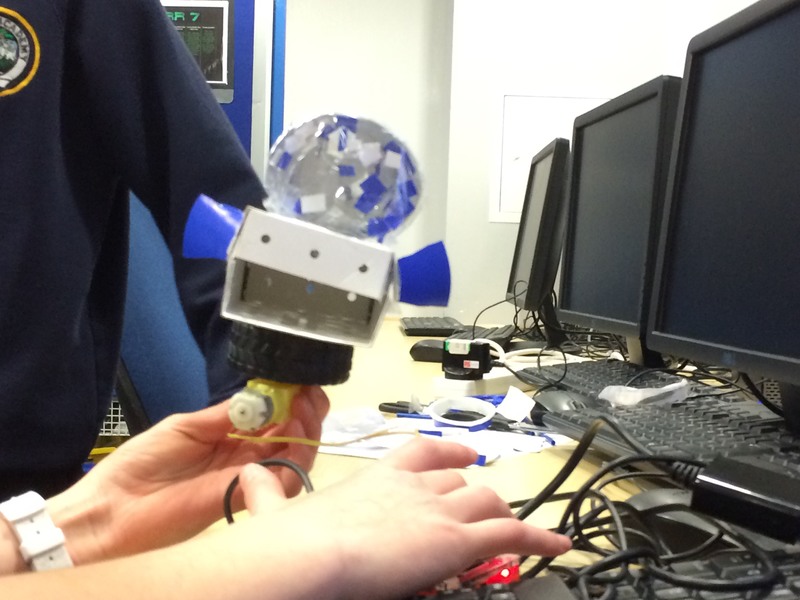 Peter is inundated with IT-enthusiasts, saying he had 110 children sign up to join the club. 'I'm running two blocks of sixteen weeks each at lunchtimes and after school. This is the first session, so we're starting with something simple. Next we'll be building roleplaying games, we'll be using Minecraft and the Raspberry Pi. Then the Makey Maker, robots, 3D printing, Ruby. There's loads of stuff to do.

The kids are obviously enjoying the lesson. Even after the hour is up and Peter brings the session to an end, the kids are still putting the finishing touches to their creations.

'My job is to get them interested in it,' says Peter. 'When it works and they understand it, you hear them say, ''Yes!'' or ''Get in!''. You never got a reaction like that with Powerpoint.They're either surprised that it worked, or they're pleased that they've managed it.'

'I've got to get them loving it, and get them to take it further. If that happens, I've done well.'

To find a Code Club near you, visit the website

The whole of our team adhere to the same values, beliefs and policies - the principles that were written when Transcendit first formed in 2000. Whether you come to us for a refurbished computer, cloud services or recovery backup you can be confident that you'll always receive the same excellent service.

We appreciate it when you take the time to give us feedback. A system called CustomerSure records our client's responses, so you can trust that our reviews are from real people.
Find out what they're saying here.
Alan is awesome! Jo Carter